I love getting advice from my PLN. I like being challenged and pushed to develop as an educator. So when @katrinakennett told me to listen to an iTunesU lecture about agency in Macbeth from Emma Smith, I downloaded and listened to it while preparing dinner. It was actually perfect timing, as I was about to introduce Lady Macbeth to my students (who would have vilified her based upon her speech about infanticide).

We began our class that day with students responding to one of the following scenarios. The goal was for the students to really think through the scenarios to decide the responsible party. Ideally, this would create an environment that Lady Macbeth was not given all of the blame for Duncan’s murder.

View this document on Scribd

The discussion based upon these questions was very fluid. Students suggested that we create a “blame pie chart” to decide the percentage of responsibility for each scenario. I was impressed with the level of thought that my students put in to all of the scenarios. My students also requested that we do more activities such as this to start the class.

Oh! For the blame game on the scenarios! The individuals were given the brunt of the blame for the negative scenarios; while for the baseball scenario, the responsibility was 50% for the father, 20% for the coach, and 30% for the Tom.

I’m looking forward to continuing reading to see who the students blame for Duncan’s death!

Update! I polled my English class today and this is the results! 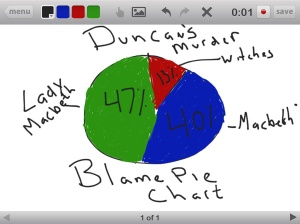 We are going to do this after each murder and then compare as the blame shifts from one person to another.

I teach students Social Studies at Burlington High School. When I became a teacher, I believed that students would frequently give me apples. This has not happened (not even a Red Delicious ~ a name which is a misnomer). However, my school has given me a MacBook Pro and an iPad in an effort to right this wrong (I assume). I'm very lucky to work in a 1:1 school.
View all posts by Michael K. Milton →
This entry was posted in English and tagged Do Now, education, Macbeth, Teaching. Bookmark the permalink.

2 Responses to Macbeth and Agency: Rethinking the Blame Game!