But regardless, I will post my ideas on how this would look just in case some talented people ever stumble upon this post and say, “Wow, that would be probably the greatest glam rock musical based on the Enlightenment ever. I must write that and give Michael [me] tickets and a t-shirt.” (Apparently, the creators of this believe that I can be bought off easily.)

At this point, some may ask “Why?” I’m glad you asked! It is the ultimate story of people being suppressed for thinking differently. Of young idealists fighting against the status quo. A battle of faith versus reason. Also, there would be wigs.

The story would begin with Galileo’s angst over having to recant his idea of a heliocentric universe. He would lament about how he has to hide the truth in order to live (under house arrest). This would just be the introduction to what is to come.

It would then follow Voltaire as he meets with his fellow Enlightened thinkers and the heads of government. He’d sing about his right to be heard, the importance of reason, and the awesomeness of coffee. Honestly, with his dry humor I could not see a better leading man.

Along the way, there would be a dream sequence in which John Locke has an epic guitar duel with Thomas Hobbes where they battle over the nature of man. Rousseau and Wollstonecraft would argue about a woman’s right to a proper education. And the gang would poke fun at what was accepted as truth.

My only concern is the ending. Do we end with the revolutions that were inspired by this period  (US, French, and Latin American countries)? Or do we end with Napoleon assuming power after the failed French Revolution? I am leaning towards the Napoleon ending…possibly having him march on stage with the lights going off as he puts on his hat. 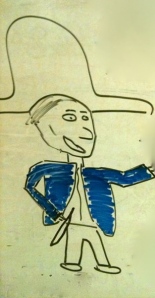 I’d love to hear any suggestions in making this the greatest glam rock musical based on the Enlightenment ever!

I teach students Social Studies at Burlington High School. When I became a teacher, I believed that students would frequently give me apples. This has not happened (not even a Red Delicious ~ a name which is a misnomer). However, my school has given me a MacBook Pro and an iPad in an effort to right this wrong (I assume). I'm very lucky to work in a 1:1 school.
View all posts by Michael K. Milton →
This entry was posted in History and tagged education, Enlightenment, History, Musical. Bookmark the permalink.

4 Responses to The Enlightenment: A Glam Rock Music Epic (proposal)