Sometimes you put an idea out “there” and the world amazes you. That is absolutely what happened in this case.

As many know, I am involved in a historical improv show called An Improvised People’s History. In order to  learn more about the historical figures, we often play The Dating Game where as historical figures you attempt to woo a contestant. After an unsuccessful attempt at winning a date as Alexander Hamilton,  my mind wandered to how I could use this concept in the classroom.

It was the following morning when it hit me….

What if Alexander Hamilton and Thomas Jefferson were on a dating game attempting to woo America?

While a bit silly, I thought it would be a fun way to get my Freshmen to understand more about their differences and why one might be on Team Jefferson or Team Hamilton. As I often do, I shared the initial concept on my tumblr site (also below) and then sent it out to the world via Twitter. 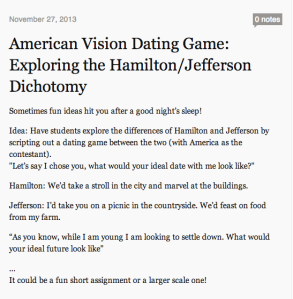 The following week, I gave my students this homework assignment for a long weekend (after explaining the concept of the Dating Game as it was foreign to my 9th graders).

Alexander Hamilton and Thomas Jefferson had radically different ideas for America’s future. What if they appeared on a dating game show where America asked them questions about their “future together” and got to choose which path was “best”?

The results were fine. Students played around with early American national identity in an interesting way and I got some unique reading material.

I did not think much about the idea again until a month later when I got a message from Susan Gorman on Twitter.

Oh goodness, her lesson is just so cool.

Susan (who is a technology wizard) developed a great activity based upon the Dating Game concept! This is the form students completed and here are the images she linked to the form using an augmented reality program called Aurasma. Like I said, she is a wizard.

Finding out that Susan used the Dating Game concept was neat, realizing that she made it absolutely brilliant made me a bit giddy and thankful that the education profession is full of people who develop, adapt and share.

It is moments like these that excites me about being connected with other educators and is the reason why I blog about my classroom.

An Example Of The Dating Game

As not many of our students may know about the Dating Game, here is a clip. With Batgirl!

Related Posts ~
Teaching the Constitution: Bill of Rights Marketing Campaign
Teaching The Constitution: Superheroes and the Branches of Government
My Why I Teach Essay: The Importance of Teaching and the Zombie Apocalypse

I teach students Social Studies at Burlington High School. When I became a teacher, I believed that students would frequently give me apples. This has not happened (not even a Red Delicious ~ a name which is a misnomer). However, my school has given me a MacBook Pro and an iPad in an effort to right this wrong (I assume). I'm very lucky to work in a 1:1 school.
View all posts by Michael K. Milton →
This entry was posted in History, Reflection and tagged education, History, Social Studies, Technology, US History. Bookmark the permalink.

1 Response to American Vision Dating Game: Hamilton, Jefferson, and the Importance of Sharing