Law and Order: French Revolution [The Importance of Using Evidence!]

Over the summer, it occurred to me that History class should be like the hit television show Law and Order.

So after noticing that many of my students were not using evidence on a prior assignment (using the Declaration of the Rights of Man), I created this assignment to reinforce the necessity of using evidence in history.

(OK, I also wanted to use this in class.)

Let’s be honest, Robespierre is guilty…but of what? The Committee of Public Safety needs to have a trial to restore the public’s faith in the French government. The charges against Robespierre MUST be absolutely legitimate and based upon the Rights of Man.

This is my 8 foot vertical whiteboard on wheels! This probably was my favorite classroom feature until I learned that I could use Expo Markers on the windows. Now it’s my second favorite feature (until I get a fireplace).

Use the Declaration to the Rights of Man to find what to charge Robespierre. Make sure you have evidence to support the charge! The stronger the evidence, the better the trial will appear to the public.

You will be given an index card. [Edit: I created this GoogleDoc for students to complete this using.] 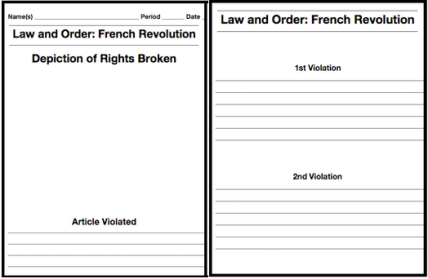 This assignment did exactly what I wanted it to do – stress the importance of using evidence.  Plus it got students to interact with the Declaration of the Rights of Man in another way (and possibly more meaningful way)!

I could have had students walk through the each others evidence and discuss what made for a compelling case…next year!

This year, students used their textbook to collect evidence against Robespierre, but I may seek out secondary sources for next year.

I teach students Social Studies at Burlington High School. When I became a teacher, I believed that students would frequently give me apples. This has not happened (not even a Red Delicious ~ a name which is a misnomer). However, my school has given me a MacBook Pro and an iPad in an effort to right this wrong (I assume). I'm very lucky to work in a 1:1 school.
View all posts by Michael K. Milton →
This entry was posted in Common Core, History and tagged education, History, Law and Order, Robespierre, Social Studies. Bookmark the permalink.

5 Responses to Law and Order: French Revolution [The Importance of Using Evidence!]