History Investigations: Voices from the Past

As I have begun to mentor an aspiring educator, I’ve been thinking about my various roles as a teacher. At any given moment I am a mentor, a guide, a sources of knowledge, a hero, a villain, a supporting player, a taskmaster, and a cheerleader. I am an ever-shifting presence in the lives of my students until I become a memory.

In addition to my metaphorical hats, I also have many physical hats that I don to embody different historical characters. I play Napoleon, Charles Knight (author of The Working-Man’s Companion), Otto von Bismarck, and a variety of generic roles from different periods of history. I often find myself on Amazon thinking, “seriously, how have I lived 35 years without owning a Victorian era top hat?” As a teacher, you try many ways to make learning more engaging and the smattering of characters is simply one of those ways.

Over the past few years, I have been trying to create opportunities for my students to interact with history. Sometimes ideas for this hit you at the oddest moments. One snowy day during winter break, I was myself watching one of the Mission: Impossible movies when I heard…

“Your mission, should you choose to accept it is to…”

Could I use this as an assignment set up in the classroom?

The idea delighted me as I imagined myself sending self-destructive assignments to my students.

What if it wasn’t me who assigned the students a project but a rather a voice from the past?

This led me to, over a year or so, develop several Voice from the Past assignments. I am sharing three in this post that while are formatted differently and use varying levels of technology, they all have a similar set up. One is about the Lewis and Clark Expedition, one of an investigation into the assassination of Franz Ferdinand, and the final is a look at the origin of the Mexican War.

The Lewis and Clark Expedition

When discussing the Lewis and Clark Expedition, I wanted students to examine different aspects of the journey. I thought that it would be interesting to have Thomas Jefferson introduce the activity. Well, it’s a silly version of Jefferson. 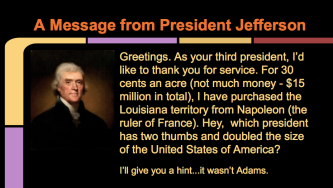 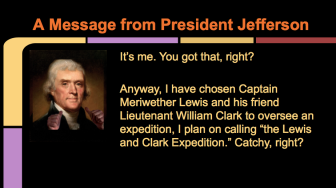 For this activity for my ninth grade students, after Jefferson gave the students a background to the Corps of Discovery, students completed tasks in groups at four stations examining artifact collection, meeting the native populations, examining and sketching flora, and learning more about Sacagawea.I used various resources to create this – from the Stanford History Education Group to my textbook’s resources to the art department. Each of the stations had a question answer or activity to complete and  ultimately, students wrote a paragraph about what it was like on that epic journey.

Below is the presentation to check out. For the four stations, I printed the pages and students rotated during a 90 minute long period.

The Assassination of Franz Ferdinand

My next attempt at type of assignment was a more open ended investigation into the assassination of Franz Ferdinand. I was thinking one day about the summer of 1914 and how things went from relative peace in Europe to a world war. I imagined someone living during that time just questioning how this escalated so quickly (I know, there was a month after the assassination of nothing happening but really for the common person, you started the summer maybe making plans for a vacation and ended up marching towards fighting).

I was probably watching Castle or some other police procedural where the main character opened up a cold case that they had been thinking about for years [oddly, not the show Cold Case, as I just found out it existed] when I came up with this activity. The Sarajevo police chief was the voice from the past who had been tasked to figure out how things went from an assassination to the war. He enlisted the help of my students to answer those questions. My students were to create a digital presentation to report on their findings (using an application that could include both audio and video). Below is a screenshot and here is a link to the assignment. 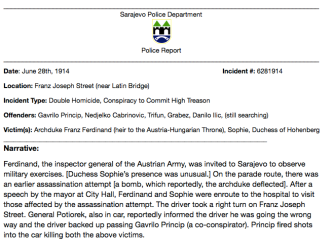 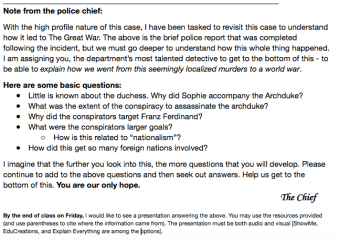 Most of the small groups gave each other tasks to complete and then had update meetings at the end of the first period they worked on this and gave each other homework before coming in the next day to create their presentations. My role was to point to various resources and then let students get into the history. Students came up with inventive presentations one of which included elements from True Detective which had recently debuted it’s first season.

The Origin of the Mexican War

This last example was an assignment for a graduate class called Digital Literacies and Emerging Technologies. The assignment was to create an interactive webquest. Around this time, I was researching about the Mexican War and Abraham Lincoln’s quest to get to the bottom of exactly how it happened. I had read that Lincoln (who was in the House of Representatives) was called “Spotty Lincoln” as he wanted to know the exact spot over which the war began (he was doubtful of the government’s story that the Mexicans had invaded the US). This fascinated me and I envisioned my students as staffers attempting to answer the questions that Lincoln had.

I created this assignment using a free Weebly website as was suggested by my professor. It was rather simple to set up and was easy for my students to navigate. What I am most proud about this activity is the use of speeches from Abraham Lincoln. While I had to modify some of them, much of the set up is from various speeches he gave while trying to get to the bottom of how it happened. Their final presentations were similar to the Franz Ferdinand assignment and for this assignment I included some vetted resources for them to create their assignment. Here is a link to the website where this assignment lives.

Overall, though they are a bit time consuming to create I rather enjoy making these types of assignments. These are not everyday activities but are experiences that I try to pepper throughout my courses. Feel free to use and adapt these for your classes.

And if you have assignments that include voices from the past, share them! I’d love to see what others have created.

I teach students Social Studies at Burlington High School. When I became a teacher, I believed that students would frequently give me apples. This has not happened (not even a Red Delicious ~ a name which is a misnomer). However, my school has given me a MacBook Pro and an iPad in an effort to right this wrong (I assume). I'm very lucky to work in a 1:1 school.
View all posts by Michael K. Milton →
This entry was posted in History and tagged education, Franz Ferdinand, History, Lewis and Clark, Mexican War, Social Studies, Teaching, World History, World War I. Bookmark the permalink.

2 Responses to History Investigations: Voices from the Past